The Future of Lakeforest Mall 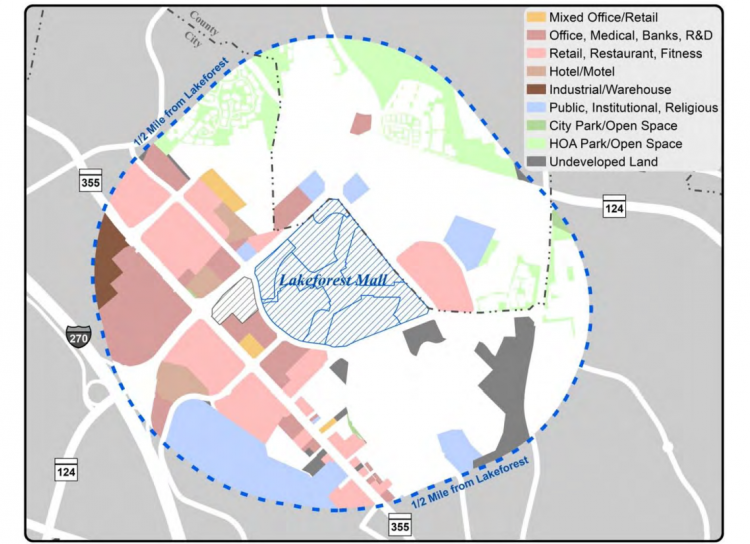 What’s happening at Lakeforest Mall? Is it going to be redeveloped? If so, when?

Lakeforest Mall looks like one large property, but it’s actually 5 separate properties with 5 different property owners; the center core part of the mall has one owner, and each of the anchor stores has a different owner. They are all governed by a document called a “reciprocal easement agreement” (REA), which basically ensures that one owner can’t make any substantial changes to their property without the permission of all of the others.

If you’re wondering why the mall has seemed frozen in its current state for the last 15 or 20 years when it was clearly ripe for redevelopment, it’s because of that REA.

What Would Need to Happen for a Redevelopment

In order to redevelop Lakeforest Mall, one of two things needs to happen:

Once that happens, they can come to the City with an application to rezone, if necessary, and a concept plan for redevelopment.

It is important to note that all of the Lakeforest Mall parcels are privately owned; the City does not have any direct control over them nor over who buys or sells them.

In mid-2019, the City was poised to engage in a Master Plan update for the Lakeforest Area. The Master Plan is a document that governs land use decisions in the City, setting out broad parameters for rezoning and potential redevelopment.

Our thinking, at the time, was that we could engage in an extensive public process and work to lay out a general vision for the future of Lakeforest (i.e., should it be rezoned? what sorts of uses should be allowed? etc) so that, when someone comes along who is able to acquire all of the pieces, they will have a better sense of what sort of redevelopment ideas the City would be looking for.

However, right before we embarked on that journey (in fact, the very same week), we received news that a South Carolina-based company, WRS, had purchased the core part of the mall and intended to purchase the anchor parcels as well – and then submit an application to redevelop. After their purchase of the core, WRS contacted the City and requested that we put off going forward with our Master Plan update so that they would have some time to come to terms with the anchor stores and secure financing to purchase them.

The Council and I agreed to give WRS a few months to get these things in place. If they could get these deals done, we could start looking at next steps; if not, we could begin our Master Plan update process we’d put on hold.

By the time we got to August, WRS had had more than a year with which to make deals with the anchors and secure financing. However, they’d been unable to get any of it done. At that point, the Council and I decided that, since a future redevelopment at Lakeforest would require an extensive public process and a Master Plan update anyway, we would move forward with our process.

As I mentioned earlier, if and when WRS is able to get these deals done, the Master Plan update will give them and their investors a much clearer picture of the sort of redevelopment that the community is looking for at Lakeforest, which I believe is a good thing for everyone. And, while the WRS team disagrees, I believe it’s in the best interest of the City to undertake this process.

Where We Are Today

Per our direction, last August, our City staff began a comprehensive, one-year, public process for gathering input on the future of the Lakeforest property and updating our Master Plan. Thousands of people have participated in the surveys. Hundreds more participated in numerous focus groups. And others testified at public meetings and submitted written testimony.

Earlier this year, staff presented a draft Master Plan update, which you can read here. We will have a public hearing on the draft update on June 7, 2021 (please join us and testify!) and we expect to have our final vote on the update in mid-August.

UPDATE: We held the public hearing in June and are scheduled to have vote on the Master Plan update at our August 16th meeting.

WRS is continuing to try to reach agreements with the anchor stores and secure financing for purchasing them.

And that, my friends, is where things stand on the future of the Lakeforest Mall property.

You can always reach me at
my personal email address:
jud.ashman@gmail.com

Fill out and submit this form, and welcome aboard!